I used to have hair. 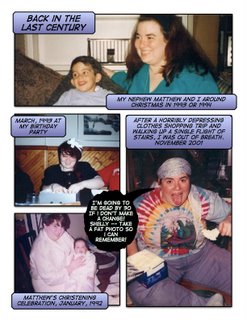 In the early 1990s, at 5'2.75" in height,my weight peaked at a truly unhealthy 298 pounds. The combination of the impending threat of breaking the 300 pound mark and an incredibly depressing shopping trip to buy clothing for interviews after graduating college in November of 1991 sparked a change. In the moment when I walked up the single flight of stairs to my home and was out of breath, huffing and puffing at the top of the stairs. I was certain then if I didn't change, I'd be dead by 30. At that point, I decided to grow my hair out and that my hair growth would be the symbol of change and I would -- as Sampson and Deliliah might -- use my hair as my power center.

Change. It was the only thing that would save me and I knew it and my hair became my talisman. As time passed, I began to define myself in terms of my hair -- my sense of self, feminity, grace and anything related to my vanity. It was the only part of my body I paid attention to. All the mirrors in my home showed me from the waist up -- or even less of me, mostly centered on my face. As a matter of fact, despite the fact that I had already begun losing weight by the end of 1991 when I was 22, I did not have a full length mirror until nearly a decade later in 2000.

In the years between 1992 and 2006, I lost a full human size individual worth of weight -- about 120 pounds in total. And while I had changed my ideas about my hair -- in large part because it was a lot of work to wash it all the time when I began teaching fire dancing classes and the smell of kerosine in it was, to say the least, gross -- it still was the only part of my physical form into which I put my vanity. And my identity. 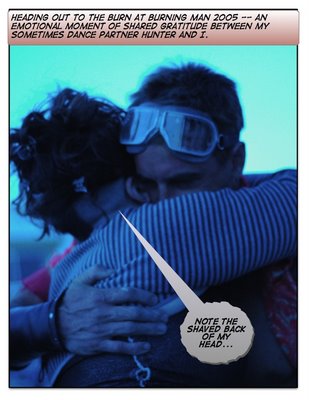 Recently I’ve come into awareness of my own fears around being thin/thinner –- partly the whole thing about not being able to take care of myself and handle my personal safety; partly being afraid of having guys come on to me. I realized recently in a conversation with one of my best friends that I’m afraid to be fully expressed as a woman sexually. The combination of my desire to feel confident in taking care of myself as well as desiring to be comfortable as a sexually expressed woman lead me to the strong urge to change my self perception.

Meanwhile, a few months ago, when the back of my hair (which I had shaved for Burning Man in 2005 for comfort reasons) was short and growing back, it became a major pain for me to manage while I was hooping because I kept burning it at fire practice and I was spending a really long time trying to tie it up. 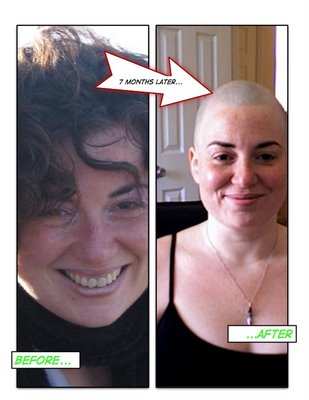 I jokingly said, "I should just shave it off." after about 4 times of saying that, I started to really think about it and noticed my attachment to my hair and how it is that my hair has been the only part of my body I've ever been vain about. I have had this crazy idea that all vanity is bad. But that is about as true as saying all ego is bad. There is healthy ego -- know thy self... And there is unhealthy ego -- narcissism. Same with vanity. I don't have healthy vanity yet, so I'm really working on that and I thought if I redirected the energy from my hair (the ONLY part of me I've ever been vain about) that I'd learn some healthy vanity.

I begin my journey of having a a shaved head because:
- I am not my hair (or body or job or blog or web site or car or...)
- I wanted to know what men felt like when they went bald -- all the men in my family are bald or partially bald
- I thought it would be one of the hardest things I could do to and for myself aesthetically
- I wanted to see myself differently
- I wanted to see how the world interacts with bald women
- I wanted to develop healthy vanity
- I was afraid to do it
- I know I will grow from it