What do you want to be when You grow up? 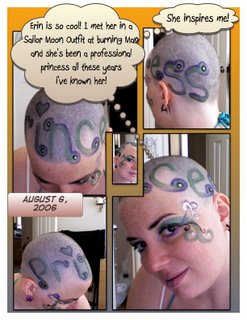 Other than my own job, I am not certain I could imagine a cooler job than the one Erin Glover has. She is the CEO and Founder of FirePixie Entertainment, a fabulous entertainment company which specializes in children's parties. Which means people pay Erin and other similarly talented actors, to attend their Children's parties and perform as princesses and princes and fairies and fun magical creatures and whatever else the party goers might want. And when that isn't enough? She whips out her fire and flow gear and dances up a storm with other fire pixies dancing around.

Erin's an inspiration to me. She is living her dream and is recently engaged to an equally awesome being. Check her out if you need to hire a performer and we're already booked.
Posted by glittergirl at 8/06/2006 06:42:00 PM No comments: