What's the bravest way to go?

May 20, 2006 was the night of the Black Rock Arts Foundation's Fire Arts Exposition at which the original crew from mN8Fx were getting together to perform again. I had originally planned to shave my head after teaching at the Texas Flagger Weekend in Dallas put together by my good friend Phillip Bryan and have him shave my head. I hadn't actually told many people I would be shaving my head at all -- Phillip, Lacy, Vladlen and Spencer knew about it. 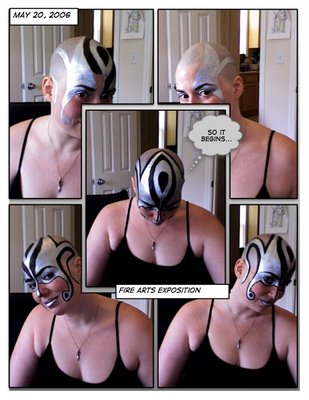 Then I washed my hair and I had run out of conditioner and I thought, "What am I waiting for? It isn't going to get any easier!" So I cut if off that night, knowing it would go on the video tape being created for the event and that it would be memorialized in style. I thought it would take a particular kind of bravery to just do it without anyone knowing it was happening and show up at a performance all decked out as I did.

I was received so well by people. Lots of people, especially women, mentioned how brave and/or bold they thought it was. I had been super nervous about how I would feel meeting people. The first person I saw was Crimson Rose, one of the organizers of the event, an executive officer of Burning Man (BRAF is part of the Burning Man organization) and a woman I feel honored to call a friend. Crimson, for those of you who don't know, has this amazingly majestic long white hair (not dyed I don't believe) that I have always looked at with awe. It's really beautiful.

Her first comment to me was one of support and her saying, "I've always wanted to do that." Throughout the night, people stopped me and congratulated me and said it was a bold look. I got stopped by several folks for photos as well -- but then, that could have been the makeup. I also realized when people stopped me I had been uncomfortable being looked at -- an odd thing for a performer to say, I'm sure, and true all the same.

During my performance with Hunter, I got to run the fire over my skull -- it's hot! And my skull is sensitive. I wonder if it is that sensitive when you're actually bald rather than shaved...?
Posted by glittergirl at 5/20/2006 12:12:00 PM No comments: