I first saw a WWJD button on the playa in 2003 and I had no idea what it meant. Someone more educated than I informed me it was asking the question, "What would Jesus do?" 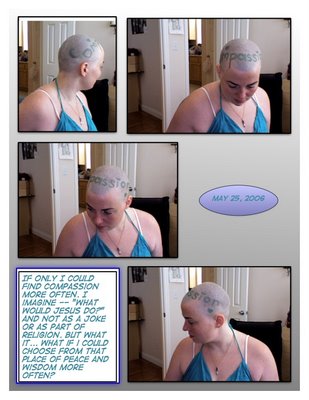 I believe Jesus was a bodhitsattva which I understand to be an enlightened individual who chooses to postpone entry into the Buddhist equivalent of Heaven (nirvana) -- despite their deserving it -- and instead choosing to serve here on Earth to help all others find similar enlightenment.

I often consider the story of Jesus being hit in the face and turning the other cheek to the person who hit him. When I first considered that I thought, "That's stupid! Why would you let someone hit you?" Through time I've considered this story and come to think of how compassionate Jesus must have been to offer his cheek to this individual. I imagine how someone would come to the place of striking Jesus on the face and consider that was the best they were capable of communicating in the moment.

Then I imagine what Jesus was experiencing. I think Jesus must have been enlightened enough to understand he was not the body that was being hit (just as I am not my hair) and in that moment, by offering the person his other cheek, he was truly offering love to the person who hit him.