How would you react? 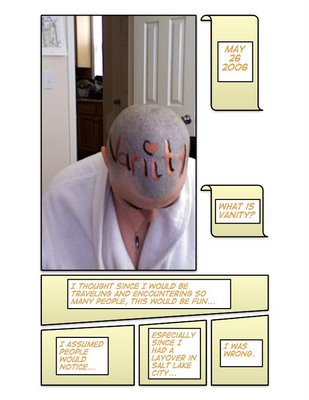 I wondered what other's might think when they saw me bald -- especially traveling from Oakland to Dallas with a layover in Salt Lake City. I figured I'd be interacting with hundreds of people, at least on some level. I also though it was clever to replace a well put together hair style with a simple word, "Vanity," and just assumed people would react to it.

When I got on my second flight I sat next to a lovely couple who were probably in their 50s from Dallas just returning from a 7 day cruise in Alaska. While they had seen me in the airport, they hadn't the time to notice my head because they were too busy trying to get on the plane or get to their gate and manage their own travel process. So while I thought the airport would be a fun place to play with people's ideas of right/wrong/good/bad/sick/healthy/vanity/self-image, I think perhaps a mall would have been a better choice.
Posted by glittergirl at 5/26/2006 11:10:00 PM No comments: