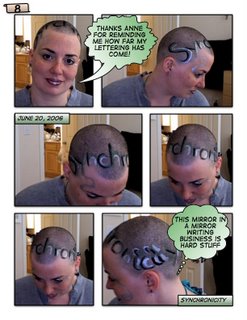 I grabbed my makeup today and thought, "What am I going to put on my head?" Then I looked up at a beautiful poem Vikki wrote for me which had the word "synchronicity" in it. I saw the word and thought that would be what I would use.

Getting in the bathroom and writing it on my head I realized I misplanned the spacing so I had to use a mirror in a mirror -- a completely new skill and I must say, I mind bender. When I got to work, Anne commented on how far I had come with the writing on my head from the first day of "Hope" looking like "nope" to three colors and long words. Evolution, yes indeed.

In 1983 when I bought the The Police album Synchronicity (on vinyl, believe it or not). I had no idea what the word meant. The dictionary would reveal the meaning as: n : the relation that exists when things occur at the same time.
With oh so meaningful definitions like that one available to clarify what it meant (ha!), the lyrics to the albums title became a mantra which rung in my head, especially these:

A connecting principle,
Linked to the invisible
Almost imperceptible
Something inexpressible.
Science insusceptible
Logic so inflexible
Causally connectible
Yet nothing is invincible.