I did not have sexual relations with that woman... 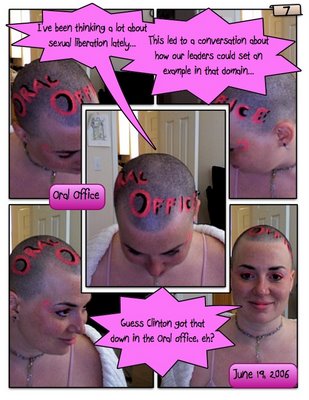 Has it really been 11 years since this whole Clinton /Lewinsky thing happened? And have you done a Google search on her recently?
I'm not really one to judge someone else's sexual tendencies and, as a woman who can't imagine having only one lover for the rest of my life, I certainly understand the temptation an attractive woman (or man, for that matter!) can create for someone. And, that said, I do question the integrity of a man who says things like, "I did not inhale" and "I did not have sexual relations with that woman..." I'm curious... did anyone actually believe him? Did him lying about it somehow make it better? Oh, but don't get me started there... that leads to a whole other conversation about how absolutely frightened we are of simply speaking our truth.
When I got fired in 2001, my employers said it was because I was "insubordinate." At my unemployment hearing, it was revealed that I was fired for calling my manager (so what if he was a VP?) incompetent to do his job. I sat there in front of the judge and the HR folks from my old company and proudly admitted what I had said. The judge's ruling went something like this: Ms. Isaacs wasn't insubordinate; she was ignorant. I guess I still am because I don't ever want to work anywhere where people can't tell me I'm incompetent simply because I'm a VP.
Posted by glittergirl at 6/19/2006 09:04:00 AM No comments: