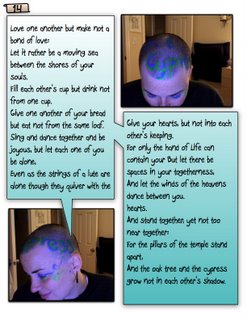 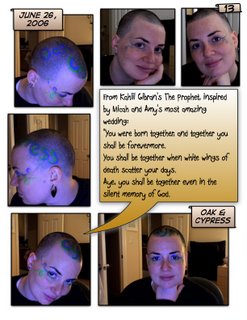 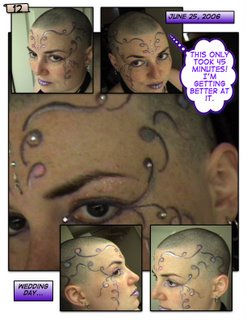 I had the most amazing experience this weekend at my dear friends Amy and Micah's wedding. I must say, I don't usually think of marriage as an institution I support or agree with in soooo many ways. So many people I have met seemingly "do it" for the sake of what they think it should be, what they think they should be or what they think the idea of marriage is based on the cool fantasies Disney has effectively sold us.

Don't get me wrong -- I'm not saying people don't love each other. It's just that I rarely see a couple that I look at and go, "Ahhhh... Yes, this makes sense and they will evolve with each other and grow in their relationship at the same time."

I'm proud to say my friends had the best ceremony I have ever had the joy of witnessing.

Their friend Aaron, who officiated, did an amazing job. He called attention to his own evolution about the idea of romance and the idea of becoming one when getting married... to "stand together, yet not too near together" and the beauty of retaining our own Selves when we embrace our Other. This line comes from this piece on Marriage from Kahlil Gibran's The Prophet -- an amazing reading as part of the ceremony -- which resonates with me so deeply as I consider in my own life what marriage could or would mean:

You were born together, and together you shall be forevermore.
You shall be together when white wings of death scatter your days.
Aye, you shall be together even in the silent memory of God.
But let there be spaces in your togetherness,
And let the winds of the heavens dance between you.
Love one another but make not a bond of love:
Let it rather be a moving sea between the shores of your souls.
Fill each other's cup but drink not from one cup.
Give one another of your bread but eat not from the same loaf.
Sing and dance together and be joyous, but let each one of you be alone,
Even as the strings of a lute are alone though they quiver with the same music.
Give your hearts, but not into each other's keeping.
For only the hand of Life can contain your hearts.
And stand together, yet not too near together:
For the pillars of the temple stand apart,
And the oak tree and the cypress grow not in each other's shadow.

Congratulations to the Oak and the Cypress -- two amazing people who really thought this through.
Posted by glittergirl at 6/25/2006 01:09:00 PM No comments: